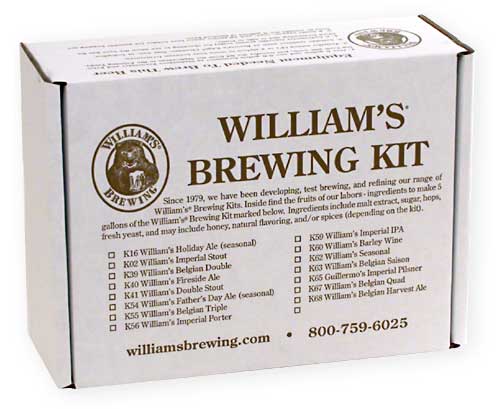 In stock, will ship on Tuesday, January 18

Imperial IPA is a term largely popularized on the West Coast of the United States, and refers to something stronger than a double IPA: a beer with more than twice the malt and hops of traditional West Coast IPA (which is already a fairly strong and hoppy beer).  We have developed our Imperial IPA to be a strong ale with a crisp malt character and rich Simcoe hop accent. This is an ale for those who like a beer to be as flavorful as possible, for those who drink slowly and savor each swallow.  Alcohol: 8.5%, IBU's 95.

We have reformulated this kit as of May 17th, 2013 to have a crisper, more pilsner like malt character and stronger Simcoe hop accent (keep this in mind when you read the reviews below).

Includes 13 pounds of our blended malt extract and brewing sugars, flavoring and aromatic hops (four additions), liquid ale yeast, and corn sugar for carbonation. Makes 5 gallons of strong ale with a starting gravity of at least 1.088.

This is an Advanced Kit: You will need a Secondary Fermenter, Yeast Starter Kit (item Q27), and Oxygen Aeration System (S78) to brew this kit successfully.

This shows our Imperial IPA after it has been in the bottle for 3 weeks.

Fifth time brewing this, hits the mark every time. Friends and family love it. Ultra-smooth high gravity. Hard for me to have something else when I have this on tap. Great job Williams!!

great Ipa everybody loved it ill get it again for shure

Easily the best William's kit available. Brewed as per instructions. With exception of 9 days in Primary and 14 in Secondary. The beer was fabulous on bottling day, and very very good after 4-5 days of conditioning. Most is gone, and I'm already dreading the gap before the next batch is ready. Will order again soon, and try dryhopping with some homegrown hops.

This is a tasty IPA

I alway taste my beer from fermentation thru bottling, Nothing but good news so far.I used a starter yeast that went nuts after the second day ,But passed quickly.I tasted the 4 day old beer.It's coming along fine.The taste is definitly a strong IPA.It has a great grapefruit smell and taste.I'll be putting the secondary in my spare bath tub full of cold water For the whole 15 days .After bottling I'm going to put a six pack in a cool dark place for two weeks and the rest in a cold tub of water for the same amount of time ,Just to see if there will be a difference between the two.I will be buying way,way more in the very near future.

I oxygenated before pitching a 2 liter starter into this heavy wort. It still finished pretty high at 1.035 and is really sweet. This turned out more like a hoppy barleywine than anything remotely close to an IPA.