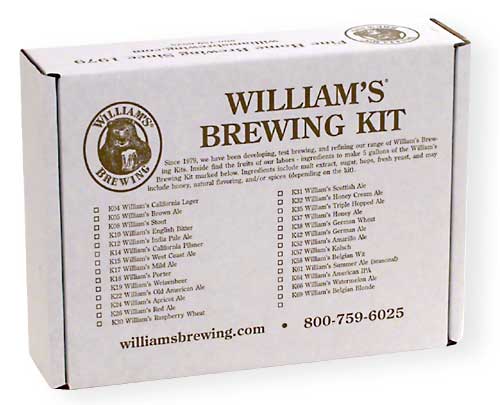 You’ve quaffed more corn than you realize. Though more often thought of as an ingredient in foods, corn has been used extensively in commercial brewing since the European-inspired lager boom of the mid 1900’s. Corn as an adjunct produces a beer with a less satiating, snappier taste, ideally suited to the often warm climate of our country.

Our Old American Ale is a refreshing light ale brewed in the style of pre-prohibition American beers, before the trend began (after the repeal of prohibition) to ever lighter beers with lower hopping rates. Stronger in hop flavor than current mass-produced American beers, Old American Ale includes an authentic malt and corn fermentable malt base, consisting of 30% flaked brewers corn and 70% two row barley malt for the light crisp character only an adjunct like corn can provide.

Choose our Old American Ale if you like a light refreshing ale, and do not have the temperature controlled aging area needed for a lager. Alcohol: 4.8%, IBU’s 23. Includes 8 lbs. of malt and corn extract, flavoring and aromatic hops, 125 ml of liquid ale yeast, and corn sugar for carbonation. Makes 5 gallons with a starting gravity of at least 1.049. Ease of Brewing: Beginner

This shows our Old American Ale after it has been aged for 3 weeks.

Pros: After brewing the Williams Double Belgium Ale my wife was hooked on the flavor and freshness of my homebrew but she asked for something a little lighter with less alcohol. This beer was the answer. The corn gives it a lightness and drinkabilty not found in some of the other traditional beers. For me this was something new and exciting. The brewing was super easy and the result was exactly as we expected: wonderful, flavorful ale. The 5 gallon batch did not last long at my home!

Cons: After drinking the Old American Ale it is hard to try another style kit.

the best home brew you will like very much.

Pros: this is the best home brew that i have made it is very good and easy to make.

Pros: I can't believe I actually made this! It was easy to make and it tastes awesome. The thing that appeals to me most is that it tastes so unbelievably fresh. A flavorful ale that has a nice lite hoppy finish. This beer would be good for someone who is just starting to drink "real beer" but doesn't want something too overpowering like an IPA or a stout. Thanks William's! Now it's time to brew a Hefe!

Cons: The only con I can think of is the small amount of sediment in the bottom each bottle but I'm getting the hang of properly pouring into a glass and leaving it in the bottle. Also, I will move to secondary fermenter next time around as this should help the sediment issue as well.

Not what I expected.

Pros: Easy. Anybody that can boil water can brew this beer. Very basic kit.

Cons: I've been brewing for a number of years and wanted to try a good old fashioned ale. I read the reviews and now I'm sorry that I believed the 9 and 10 stars that the previous people rated this beer. This beer tastes a little like Coors which I'm not a big fan of. For $32.90 I expected a lot more. There are much better kits out there than this one.