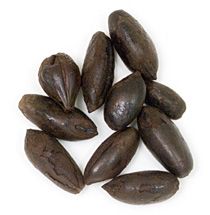 In stock, will ship on Monday, December 5

Read or Write a Review
Produced by Weyermann in Germany, this chocolate rye malt adds a rich flavor and enchanced aroma to dark beers. Originally produced for German Dunkel Rye Ale and German Dunkel Rye Wheat beer. Good for adding something different to dark, top fermented beers. The lovibond varies quite a bit, but the average is 240°. Use up to 5% in the mash.
Write a Review

Used 1# in steep for ~20 gallon extract brew. (32# Am. Light + 8# Am. Rye) along with 2# light rye. Very happy with color, flavor and aroma. I often go a bit over the top with dark malts, and am very satisfied with the light brown transparent nature of this. A great addition for some color and slight edginess of rye.