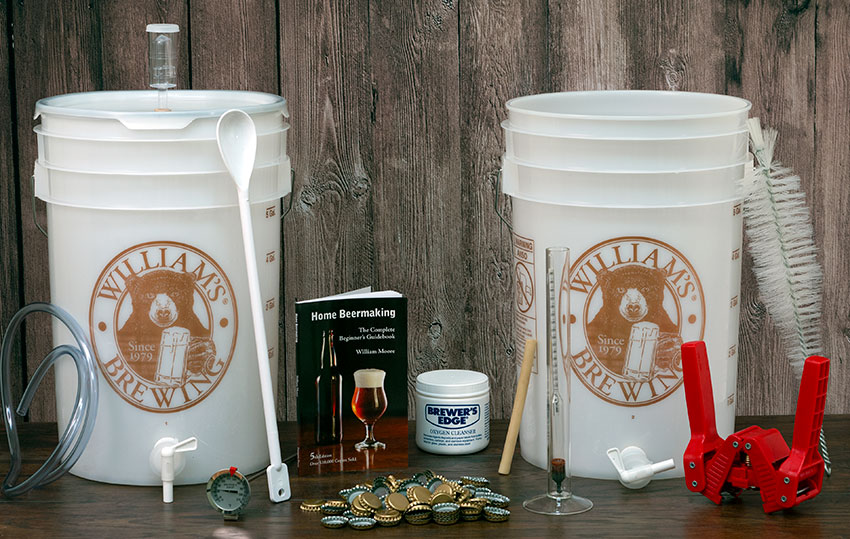 Share |
Why Brew at Home?
If you are like most home brewers, you have a strong appreciation of fine beer, as well as an intrinsic curiosity into how it is made. Why buy a William’s Home Brewery? The quality of the final beer is only as good as the quality and freshness of the ingredients used, and quality brewing is only possible when basic brewing techniques are learned and followed. In addition, easy to use, well-designed equipment helps to make brewing a relaxing, enjoyable experience. Beer is not like wine. It is best when fresh, then deteriorates after 2 to 4 months. One of the great things about home brewing is knowing how fresh the beer is you are drinking. Unlike craft beer with an unknown production date, when you brew a William’s Kit, you can drink it at its prime every time. You will also save money.

Choose your First William’s Brewing Kit
When you order our Home Brewery, pick your first William's Brewing Kit at a savings over separate purchase prices. Our kits are unique because they include William’s syrup malt extracts, condensed at low temperatures for a full grain flavor, fresh flavoring and aromatic hops, yeast strains specially selected to enhance the flavor of the finished beer, priming sugar, and illustrated brew-by-number instructions. Every kit has been repeatedly test-brewed in the William’s Brewlab to achieve a perfectly balanced blend of malt and hop flavors, and every kit on the selection list has been chosen because it is easy for beginners to brew.

Instruction & Support
All William's Kits include brew-by-number kit instructions. We also include the fifth edition of Home Beermaking, an excellent beginners book. After you read the included book and brew a few batches, you will find that home brewing can be as simple or as complex as you want it to be. To help you progress further, purchase of our brewery also gives you access to the William’s Customer Support line (either by phone or email), so you can get your brewing questions answered.

Traditional or Electric Brewing Kettle?
A 7 gallon or larger brewing kettle is needed for boiling the wort. We make this optional so you can choose between a traditional stainless brewing pot with valve, or a stand alone electric kettle so you can brew anywhere there is a 110 volt plug, and not be dependent on a stove or outdoor burner.

Wort Chiller Option:
We highly recommend a copper wort chiller to quickly cool your just boiled wort (unfermented beer) so fermentation can start as soon as possible, minimizing the risk of bacterial infection (copper transfers heat better than stainless). If you choose the copper Wort Chiller option, you will save $20.00 over separate purchase prices.

Included Equipment:
Included is a 8 gallon Fermenter, which features a transfer valve, airlock, and precise gallon markers. The included Priming Tank includes a bottling valve with tube attachment that eliminates siphoning and makes bottling (or kegging) easy and fast. A kit is also included to convert your Priming Tank to a Secondary Fermenter if you need a secondary for a particular brew. A 18" plastic stirring spoon is included to help you stir in the carbonating sugar. For the critical measurement which determines when the beer is ready to bottle, our handmade glass hydrometer features 1 degree calibrations for precise, easy to see readings, and includes a glass sample tube. For testing the temperature of the beer, a stainless steel dial thermometer is provided, which includes a calibration nut. In addition, transfer tubing is provided to transfer from your fermenter to the priming tank. To clean your equipment (vital to prevent sour beer), Brewer's Edge Cleanser is included (enough to make 16 gallons of working solution). To clean your bottles, our bottle brush is included.

Needed but not included: 48 twelve ounce beer bottles or equivalent. Salvage your own (any beer bottles without a twist cap will work), or purchase separately. You can also avoid bottling altogether with the purchase of a William's Home Beverage System.

1. The first step in brewing is to open your William’s Brewing Kit and remove the liquid yeast pack. Set the pack on a hard surface and break its inner nutrient pouch, by hitting the pouch squarely with the palm of your hand. Although more costly than dry yeast, 175 ml of liquid yeast is used in most William’s Kits to produce a cleaner flavor.

2. When the liquid yeast pack is swollen (usually in 1 to 3 days after breaking the inner seal), boil the malt and fresh hops with at 6 gallons of water for 1 hour to blend and flavor the beer in a 32 quart or larger (optional) gas fired or electric brewing pot.  Unlike some hop extract-flavored canned kits, boiling is necessary to completely sanitize the wort (reducing the chance of spoiled beer) and blend the flavors of the included hops and malt.

3. After boiling, the finished wort (brewers term for unfermented beer) is cooled with a Wort Chiller (optional) and poured off its sediment into the 8 gallon Fermenter, where the liquid yeast is mixed in and bubbling fermentation begins in 1 to 3 days.  Fermentation usually lasts 16 days before the beer is ready to bottle.

4. After fermentation has ended in about 16 days, the raw beer is transferred into the Priming Tank with the included tubing from the Fermenter tap, where the corn sugar is stirred in to provide food for the yeast to produce carbonation. This is done in the Priming Tank rather than in the Fermenter, to avoid stirring up the silty yeast sediment. With a William’s Home Brewery, there is never a need to siphon beer.

5. After mixing in the carbonating sugar in the Priming Tank, the beer is bottled or kegged. Five gallons of beer (as produced by all William’s Kits) requires about 48 twelve ounce bottles or equivalent draft system. After bottling, beer is aged two weeks or longer before drinking. Ale-style beers (which include Porter, Stout, Belgian Ales, and Wheat beer styles) require less aging than lagers, and are highly recommended for the first time brewer.

Pros: Everything needed to brew your first batch of beer! The kit comes with easy-to-follow instructions and a DVD demonstration that made brewing a breeze. The wort chiller is a must. Well worth the extra money - a very reasonable price compared to other brewery kits I've looked at online.

Pros: Everything a beginning homebrewer needs to make their first batch. I highly recommend going with the Complete Brewery for the wort chiller and brew kettle. Both items made the whole process very easy. I also like the siphonless fermenter. The included instructions are easy to follow and pretty much idiot proof. This is a great kit and I am thoroughly satisfied with the whole process. Now I just have to wait about 3 more weeks for the results! I can't wait that long...

Cons: I only have two complaints. First of all, one of the fermenters did not have the rubber cork for the lid, which the air lock goes in to. I may have misplaced it when opening the gab, but I could not find it in my house. Probably a simple oversight. Secondly, the yeast packs have two differing sets of instructions. One is by the pack manufacturer, Wyeast, the other a little orange sticker placed on by Williams, I'm assuming. The two sets of instructions were a little confusing. Wyeast instructions say allow at least 3 hours for activation, Williams said 1 to 7 days! I discovered that 3 hours was too short, probably closer to 6-7 hours.

Pros: This was my first attempt at beer making and i found the kit to be very easy to use. Everything, except the bottles, are included. Directions simple to follow end product is very good.

Cons: Found nothing to be negative about.

Excellent product for the first-time brewer. The bag of malt was a little clumsy to work with and I ended up with a bit of a mess, but for my second batch I left the malt bag on the kitchen counter overnight to warm up slightly and had no problems. One thing that would make it better is a longer thermometer. With the size of the brew kettle and the amount of water used during the boiling, the thermometer doesn't reach the water when used with the clip provided. I've had to hold the thermometer in the water during cooling with the wort chiller (a definite need and worth the added cost). Not a major problem, just something that could be addressed.

This is a great kit as far as the equipment goes. I bought this for my first batch, and have discovered that the kettle (8 gal) is large enough to do a full boil, which is great, and the transfer valve works like a charm. The fermenting and priming buckets are high-quality, and it's good to have two for future batches when you want to rack to a secondary. I just finished my second batch and didn't siphon at all--the valves work very well. The guy at my homebrew store expresses some concern that the valves might be difficult to keep clean and to sanitize, so I'll have to see what happens with them over time. Wort chiller is a great investment. I will probably upgrade the hand capper to a stand capper at some point, but otherwise I see myself using all this equipment for a long time. The IPA is a good beer. It's not really hoppy enough to be an IPA, but it's a solid pale ale with some nice malt and subtle hops, and a great first beer. The ingredients are quality and easy to use.

Q: Do I need item #E99 to go with the brew kettle? I saw the other Q&A but couldn't find the item #R22 you replied with. Any other items you would suggest I purchase along with this kit as a first time brewer? I've only helped experienced brewers before

A: The R20, or R22 (just put these part numbers in the search box to find them) and a length of 1/2" tubing, item J58 (3 or 4 feet) are good things to have to help you transfer the beer from your kettle easier. Item E50, a bottle filler, is also a great add on to make bottling easier. If you are brewing indoors and using a kitchen sink for the wort chiller, item E18 is also needed.

Q: This kit is sitting in my cart waiting to be purchased, but I need to know what size the tubing is and how many feet it comes with. Also, does the boil kettle come with a hose barb and if it does, what is the size?