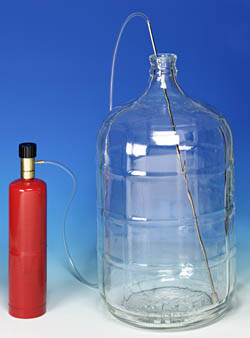 In stock, will ship on Tuesday, January 18

Why aerate your wort? Yeast needs oxygen to reproduce and produce strong cell walls. If the cell walls are weak, the yeast will have a low tolerance for alcohol, and can die before fully fermenting out the wort. Particularly in worts with starting gravities in excess of 1.050, this can contribute to long lag times, slow ferments, and higher than normal finishing gravities. Like an air stone in a fish tank provides oxygen for fish to breathe, wort aeration provides needed oxygen for yeast respiration and growth.

The advantage of the Oxygen Aeration System is that the wort can be aerated to 60% of its oxygen holding capacity in just 20 seconds, something that takes our Air Aeration System 5 minutes to accomplish. This shorter aeration means less foaming of the wort before pitching, an important consideration in higher gravity beers. This system includes a .5 micron aeration wand, for thorough oxygen dispersion.

Includes 22" Aeration Wand with a .5 micron stainless aeration stone, 4' of tubing, and an Oxygen Regulator for standard hardware store oxygen welding tanks. Pictured red oxygen bottle is not included, these disposable 1.4 and 2.1 ounce left hand thread bottles can be purchased at any hardware store in the welding or brazing section. One bottle will aerate 20 to 30 batches. Pictured glass carboy is not included.

Why buy a William's Oxygen Aeration System?  It has a 22" U.S. made stainless wand, longer than any other system, so you can easily reach the bottom of a 5 or 6 gallon fermenter without dipping the plastic tubing into the wort.

Unlike other Oxygen Aeration Systems, which feature imported regulators and wands, all parts are made in U.S.A.

Wow! wish I had bought this sooner biggest improvement in my beer so far.

If you brew high gravity, this is a must. Yeast need oxygen to produce solid skin so high concentrated alcohol doesn't kill them premature.I used it on a 1078 brew with a starter, it has fermented for six days and still bubbling. GREAT PRODUCT just what i needed. Thumbs up! PS: beats trying to shake it to get some oxygen.

Was delivered in perfect shape and works exactly how it is supposed to. After aerating the wort, just run it for 10-15 secs in your container with sanitizer and it should be clean and clear. Be sure to keep the package plastic to store the wand when not in use. Have never had it get clogged following these steps.

I've always shaken my 6 gallon carboy to add O2 to the wort and the beer fermented well, or so I thought. I used this tool (which is much easier and safer than shaking a carboy) and I had to add a blow off tube due to foam coming out the top, which has never come close before. Very excited to see if it improves the taste of my brews!)

Q: What are the outer and inner diameters of the oxygen wand tubing? Also, what is the barb size on the oxygen valve assembly? Thanks!

Q: You have a 2 micron and a .5 micron. What are the usage requirements for either of these? Does it just come down to taste, or do certain beers require one over the other?

A: The .5 micron can only be used for oxygen and can clog a bit easier. The 2 micron is a bit easier to maintain and can also be used with air/aquarium pumps, but is a bit less efficient.

Q: When using this is there any way to measure how much pressure is being used? Or do you just turn the release valve completely open?

A: You just open the valve and adjust it by watching how many bubbles are coming out of the stone on the wand. There are no pressure settings.

Q: How do you recommend sanitizing the wand and stone? Does the tubing need to be sanitized as well?

A: We clean with hot water and sanitize with Star San or similar solution. Or you can immerse the stone in boiling water for a couple of minutes.. We do not sanitize the tubing but you could rinse with a star San solution if you like.

Q: Can the aeration stone be removed and replaced once clogged?

A: The stone cannot be removed but can be unclogged by soaking in cleanser or boiling in some water.