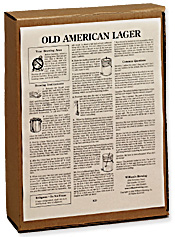 In stock, will ship on Tuesday, July 5

Youve quaffed more corn than you realize. Though more often thought of as an ingredient in foods, corn has been used extensively in commercial brewing since the European-inspired lager boom of the mid 1900s. Corn as an adjunct produces a beer with a less satiating, snappier taste, ideally suited to the often warm climate of our country.

A hearty light lager in the tradition of pre-prohibition American beers, before the trend began towards ever lighter beers with lower hopping rates. Old American Lager includes an authentic malt and corn flavor, from the 30% flaked brewers corn and 70% two-row malt used in the production of its malt base.

Choose this kit if you can ferment it at a steady 60° to 65° F., and can age it refrigerated for 4 weeks after it is conditioned in the bottle (otherwise, see our easier Old American Ale kit). Alcohol: 4.8%, IBUs 21.

Includes 8 lbs. of malt and corn extract, flavoring and aromatic hops, 125 ml of liquid lager yeast, and corn sugar for carbonation. Makes 5 gallons with a starting gravity of at least 1.049. Ease of Brewing: Intermediate

Pros: I reviewed this eariler but since only 60% found the review useful, here is the log I kept during the making and consumption of this beer: May 1, 2005 I broke the seal on the yeast this morning. I will check it in 3 days to see if it is ready to begin the brewing. May 3, 2005 Set wort. Everything went as directions specified. May 10, 2005 Racked beer to secondary fermenter. There was a lot more trub than I had noticed with previous beers (beer 1-3). I had to add 5 1/2 cups of water to fill the 5-gallon secondary, so the alcohol of the final product will be lower than it might otherwise have been. Temperature of primary fermentation: 75 (ending/max), Temperature of secondary fermentation 63 (beginning.) May 18, 2005 Bottled beer. Aging begins temperature in the wine cellar is 62 degrees. Ending specific gravity (1.014) indicates the alcohol content should be about 5.5 percent. May 30, 2005 Drank a bottle of this beer today. (Somehow this day popped up on my calendar.) It was pretty foul. It should not have been very good because it was at least 3 weeks premature, still it worries me. It was bitter and flat. Jun. 19, 05 I had my second Old American Lager yesterday – one day after it was supposed to be drinkable. It was not great, but far better than it had been when I tried it two weeks ago and better than the European Bock that is supposed to be at its prime. Considering that lager matures slowly, I have pretty high hopes for this beer. August 3, 2005 This beer should be about as good as it is going to get. Right now it is good enough, but I will continue to look for something better. I might try it again if I could get a cooler place to age it. It was aged at temperatures around 65 instead of the 35 to 45 recommended. I may try it in the winter when the wine cellar should be a little colder. September 9, 2005 It got better. I am on the last 5 bottles now and it is quite good. I will make this beer again. The bitterness has turned from harsh to mellow. Good beer by any standard. Basically, it is cloudy medium dark amber. It has a good foamy head. The taste is a bit sweet and bitter somewhat smoky. September 14, 2005 I drank my last bottle tonight. It was at its quite good.

Pros: I actually like commercial lager beer as well as lighter microbrewery beers. I also like the beers I drank in Germany. I bought this kit hoping for something along that line. My cellar is cooler than my house, but I could not keep the aging temperature at the recommended levels. When the beer was ready to drink, I was disappointed. It was stronger flavored than I had hoped and the bitterness was a bit harsh. It, however, improved A LOT with age. A month after it was ready to drink (when other home brews are going off) it was very good -- the best home brew I have made so far. I intend to make it again this winter when I can keep the temperature within recommended range, and I will let it age even longer. Mine was a medium red, dark amber with a thick head of small bubbles. Not the lightest beer with full flavor. I am proud to serve this to my friends.

Cons: It is difficult to keep the temperature at the recommended range. It does not come into its best flavor until quite a bit longer aging time than most other beers I have made.